The PCP Commune was an e-nation owned by Safeerz. Its type of government was a monarchy, with Safeerz and his "royal family" as leaders of the government. The kingdom had about 100-700 people - it is known that it was smaller than The Microsoft Agent Frontier Empire.

Before 2020, the two e-nations weren't directly at war as TMAFE was fighting with the Safeerz Islamic Kingdom. That changed when SIK was nuked and incorporated into PCP in December 2019 or January 2020. On February 26th, 2020, Safeerz decided to surrender to TMAFE. Afterwards, it became an ally of TMAFE. However, on May 5th, 2020, war was declared on TMAFE by them; before shortly ending on May 7th, 2020. On May 20th, 2020, PCP declared another war on TMAFE, before ending on the same day. On November 16th, 2020, another war almost started between TMAFE and PCP before peace negotiations were made. 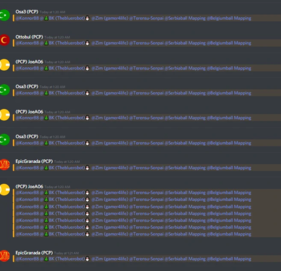 On November 16th, 2020, Safeerz had messaged TMAFE about an alliance offer again, before getting angry and threatening war. His war threat was ignored in exchange for help of removing a virus from his computer. Shortly afterwards on November 17th, he asked TMAFE about helping him against a bunch of anti-mapper and other groups that were anti-PCP due to PCP previously declaring war on them. Before TMAFE could decline his request, he had been taken down by anti-mappers, thus marking an end to the PCP Commune. Safeerz being taken down also had possibly prevented the 4th Frontierian-PCP War from happening even after the peace from earlier that day.