T-Series Mapping is an anti-mapper widely known for his claims that he will destroy mapping. The mapping community has been at war with him since May of 2019. The Frontier also joined the war. T-Series Mapping has over 100 alternative accounts, and raided many servers (most of them were mapping servers). At one point during T-Day I, he attempted to raid The Microsoft Agent Frontier Empire, but was unsuccessful, as most of his alternative accounts were easily spotted, there was a verification system, and TMAFE having very good security. He hates all mappers and their allies. He once manipulated Konnor88 with an alternative account to get admin in United Mapping Nation, a mapping section of TMAFE; he was successful, and nuked the server. He also has confirmed he is an anti-mapper because he wants attention. He was also possibly behind the raid of United World Server V7 before the server was deleted (though it's unconfirmed).

He also striked mappers like Bace Bulgarian or Korean Mapping and harassed small mappers like Idaho Mapping. Although he's no longer a serious threat to mappers and the Frontier, he created anti-mapping itself and some people took inspiration from him.

On 25 April 2020, TSM attempted raiding TMAFE, however he failed. After that, he raided Red Dragon's Server and Isaac's server. He then posted gore in Flanders Fields. Sossie proceeded to lock down TMAFE, Chaoland and Isaakist G19 to prevent further raids. 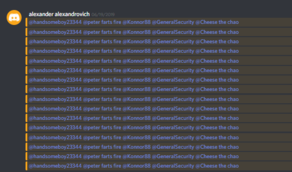 A screenshot of a TSM alt attempting to the raid the The Microsoft Agent Frontier Empire.
Retrieved from "https://frontierpedia.tmafe.com/index.php?title=T-SERIES_Mapping&oldid=8199"
Category: