This page contains a legacy template that uses the legacy <infobox> tag. After MediaWiki 1.36.0, this template will no longer be supported.

Powerful stars, a bird from Prussia during the Wiemer Republic, the Chao that represent chaoland.

The Empire of Chaoland is an E-Nation created and lead by Chaogamer. It was formed in 2018. The e-nation is mostly made out of Christians, thus making Christianity the majority religion in Chaoland. The country is made for everyone, and they are mostly targeting at Polandball and Countryhuman users. The e-nation has also had multiple government system changes as it first was a democracy, then a communist state, then again a democracy, then Frontism before changing its government into a monarchy. 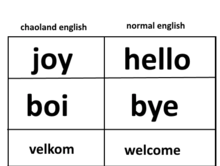 Chaoland hasn't been in much wars, but here are some notable ones.

they first joined community war 4 on october 6th 2018. However, they only aided TMAFE to win the war.

The Big War was on March 30th 2020 when Chaoland declared war on the Vlare Troll Police (VTP), the war lasted from March 30th, 2020 to April 1st, 2020, making a new territory called Rodamia which became a state on April 10th, 2020. Chaoland won the vlare troll police war.

Then another war, where they got really big, which was Community War 17, Chaoland joined the war to protect Calliphate of The Reborn Persian Empire from Clippy, they didn't do much during the first days of the war. Then Chaoland decided to attack Vyonder channels. they started a invasion on Michael the GoAnimate Guy, which failed a lot. Then 1 week later, they found out about Geri, and started a invasion on Geri from Rodamia offensive line, the war ended when Chaoland signed peace treaty with Geri, where Geri has to give up his discord server to Chaoland, and to leave BonziWORLD for good, it was signed and Geri server was then annexed, making the Holyia territory. Community War 17 lasted from April 16th to April 24th, making it the longest war in Chaoland history.

On May 27th, the war with Soundcard started due to Chaogamer making rumors about Soundbot, which caused multiple communities to hate TMAFE. The Frontier also joined in the war, when it was discovered that Chaogamer was manipulating logo editors against TMAFE. Two nukes happened in Chaoland, and the war caused Chaogamer to disband the e-nation and rebrand it to Chaogamer's Epic Server.